All the hubbub about the UCI making disc brakes cyclocross legal is not without good reason. When you combine twists and turns, quick downhill to corner transitions, long paved finishing stretches and muddy conditions, stopping power is often a key element in the race. The ability to truly speed into a muddy 180 degree corner while skimming just the right amount of speed is probably only mastered by a few select souls. The rest of the racing population needs good brakes and good tire traction. Often times racers are looking for more of both! We stumbled upon a product from the wizards at Problem Solvers. At $11 for the part, a cable hanger that is substantially wider then a stock hanger, it was too good to pass up.

The thought is that the further you move the pulling point out from the fulcrum on the brake itself, the more torque will be exerted on the rim. We decided to put it to the test using a slight hill on a nearby road.

Here is our stock set-up on a set of TRP Euro-X brakes. Pretty popular among racers:

That hanger is 30 mm wide. Here is what is included in the simple Problem Solvers kit: 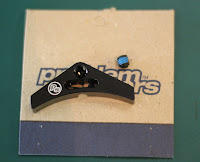 As you can see, it's pretty simple.... A hanger that is 50 mm wide and a larger then usual set-screw for afixing the the cable that runs down from your brake hood.

Here is the new set-up: 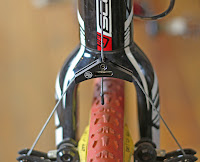 We ran a series of 4 tests with each set-up. All of the run were done from a set speed obtained from rolling down the hill without pedaling. The only factor that could influence each run was wind speed, which was minimal, as the bike was only traveling at approx 16 mph. Starting out we hit the brakes with an estimated 25% force. Just enough to get the bike to start stopping. Then 50% force which was probably the least accurate of the runs. The 3rd one was a down-in-the-drops, full force stop.

We only used the front brake and the tires were at a normal 40 PSI. A carbon Zipp 303 was used.

Runs #1 and #2 between the 2 hangers were very similar. If anything, the wider hanger actually did a worse job at stopping the bike, as we over shot the stopping point for the older hanger consistently by 1-3 feet. Not much, and not enough to really mentally notice. Still it left us wondering.

Run #3 was a different story though. A full on stop with the wider hanger yielded a stop that was 33% shorter.

To confirm this we went to steeper hill and stopped from approx 25 mph, full on, hand in the drops, squeezing as hard as the bike would safely allow. With the wider hanger, stopping distances were improved by that same one third.

Conclusions:
It makes sense that the wider hanger would start to work better when more torque was applied to the brake arm. So in the end, if you are the type of rider that slams on the brakes a lot, then these will indeed help you stop sooner. Plus, in the case of replacing the TRP hanger, it shaved 2 grams of weight off ( 12 grams to 10 grams ). The only con we can find is that setscrew. Not the ideal way of grasping a cable that routinely sees so much pressure. We will be checking that screw often as it is easy to picture the cable slipping out under especially hard braking.