.
.
.
Some more interesting numbers from the Kona Ironman Triathlon:

.
.
.
And on the other side of awesome, this is what happens when some nerds of the medieval times get their hands on a GoPro camera:

These two gloves at first glance are very similar but after riding an hour and half with each one on a different hand, the differences become apparent. The Craft Active is actually marketed as a multi-use glove, with it being suitable for nordic skiing, cycling, and running. Makes sense to me. The L.G. is $5 less at retail.

Dexterity
Winner: The Craft Active
Even though the Craft is a thicker glove, it fits soft and snug against the skin without being too tight. Finger tip sensitivity is good in both gloves. The L.G. has seams on the inside of the fingers that make full movement a little rough feeling. However, the L.G. is, predictably, the better glove to grip a handlebar with, as it has no fill layer. Points also go to the L.G. for its thin and refreshingly long cuff. The thin cuff went under my winter jacket no problem and stayed there. The Craft, with its much thicker wrist cuff had to go on top of the jacket. I prefer cuffs under the jacket but you may be completely different.

Windproofness
Winner: The Craft Active
Both gloves did very well in this test and it was almost too close to call. Only at 35-40 mph going downhill could a real difference be felt, and that is where the Craft felt a little more shielded from the wind.

Water Resistance
Winner: The Louis Garneau ECO Flex
For this test I showered the gloves with some water and then moved my hand, fingers and wrist around until I could feel the moisture seeping in. Whether or not this simulats what happens on the bike, who knows. But for the sake of comparison, the L.G. felt drier. The soft insulation of the Craft seemed to sponge up the water.


Nose wiping ability
Winner: The Louis Garneau ECO Flex.
The engineers who put together the Craft glove should be given a stern scolding about this one. There is no spot to nicely wipe your nose on the Active.

Actual Temperature Reading
Winner: The Craft Active
It shouldn't come as a surprise that the glove that feels thicker and has a layer of thin insulation should end up being warmer in real life. After the first 15 minutes of riding during what I call the "cold shock" period the temperature inside the Craft was 48 degrees. Inside the L.G. was 45. Both felt like they were under-performing, and both hands felt cold. But that could be due to how my body was dealing with the cold air that day. After 25 minutes or so, both gloves started to warm up on the inside. The L.G. took a little longer, probably due to the fact that it seemed to be a tighter cut on my fingers. If you are generally the type that doesn't like tight fitting gloves, it would be best to try on the L.G. before buying them. After the entire ride, both gloves were in the sixties with the slight difference being in favor of the Craft.


Overall Warmth Impression
Winner: The Craft Active
This was almost too close to call. The L.G. does a great job at trapping warm air inside without the aid of insulation. After the initial warming up, both hands felt similar. It was only because the Craft felt warmer at first does it take the win in this category.

OVERALL WINNER
Again, its a tough one to call, but if I had to chose between the two I would go for the Craft.  Its a glove you can ride with when its 32 degrees out with a chance of falling temps. The Louis Garneau is a great short range glove for rides under 2 hours.

The Craft Active..... Buy it if you need a warm, below freezing, glove but absolutely can not stand heavy filling and insulating layers.

The Louis Garneau Wind Tex ECO Flex.... Buy it for 32-45 degree riding and racing... Its light weight makes it a great race glove.
No comments:

These two gloves are pretty different and are priced accordingly. The P.I. model is definitely more of a all-in, lets ride thru a blizzard type glove. The Bellwether glove could be called more a midweight glove. It has no filling whereas the P.I. has a fill layer.

Dexterity
Winner: the Bellwether Windstorm
No brainer here. The thinner glove will probably always win this one. Even so, the Bellwether was cut oddly in the fingers, leaving some strange wrinkling and it had a not-so-great fit feeling. On the other hand, the P.I. had what I am going to call from now on; "stuffing slop". That feeling of shifting and squish when putting your hands on the brake hoods. This is due to the fill layer that keeps the glove so warm. But it makes for a far less then efficient feeling interface with the bike.

Windproofness
Winner: the Pearl Izumi Elite
While coming down a descent at 35 mph, even with cold air getting thru to my chest despite 3 layers and a windproof jacket, there was barely any perceivable wind getting thru to my hands. The P.I. was impressive in this manner. The Bellwether did an ok job, and I will compare it to a glove of similar ingredients soon.


Nose wiping ability
Winner: the Bellwether windstorm. Both gloves were nice for this, but I caught my nose on the pvc thumb tip of the P.I. a couple of times. Not too pleasant.

Actual Temperature Reading
Winner: The Pearl Izumi Elite
If you are like me, your hands ( and especially your fingers ) are most cold in the initial 15 minutes of ride and then they seem to warm up. I always thought that the hands simply adjusted themselves to the cold air after that 15 minutes & the "buzzing feeling" of the cold air goes away. The numbers however show a different story.
I stopped after 15 min on the bike and found the temp in the P.I. glove to be 50.3 degrees. Inside the Bellwether; 47 degrees. Not a big numbers difference but the Bellwether hand felt considerably colder. After that, both hands felt like they warmed up and the P.I. hand was even perhaps a little too warm.
At the end of the 70 minute ride, temperature in the P.I. glove was 79! In the Bellwether; 75. Roughly the same difference but it was surprising to see just how well your actual hand does in regulating it's temperature. In this case, significantly increasing the temperature inside the glove. It proves that some people simply have hands that do a better job at warming themselves. I would guess that I am in the middle of the range, whereas someone like Jeremy Powers, racing CX with no gloves on, has hands that are much better at it!

Winner
In this initial lopsided matchup, the P.I. wins despite being a much clumsier glove that was overkill on a 33 degree day.

The Peal Izumi Elite..... Buy it if you are going to be riding while it is 20 degrees or less. Or if you need a glove that can be used for skiing and other winter sports. Skip it if you will be using it while it's warmer out and if you dont't like your hands being hot.
The Bellwether Windstorm..... Buy it if you like a glove that looks PRO and you won't be riding when it is less then 30 degrees. If you are someone that takes his helmet off or adjusts his shoes a lot during a ride, skip these gloves.
No comments:

Now that cyclocross season is over and a brief break from the bike has been enjoyed, the focus has turned to getting in training miles for the next year. If you are like me, keeping your hands at least somewhat warm is a top priority and makes riding in temps under 35 degrees ( Fahrenheit ) possible. Over the next week or so, I will be reporting on my experiences with a few different models of winter gloves. Gloves from Pearl Izumi, Hincapie, Bellwether, Craft and a couple of others will be put thru the paces. Interesting details have already come out after just one test session.

In order to keep things somewhat scientific, for each of my rides of an hour or more, I will be wearing a wired thermometer taped to a finger to get an accurate idea of the actual air temperature in the glove. For each ride I will be wearing a different glove on each hand for thorough comparison of different models.
No comments:

.
.
.
Rockstar Cycling tip #71 - For time trials, put ear plugs in your ears. If you hear less wind noise, your perceived exertion will go down and your mind will tell you to ride faster.
No comments:

.
.
.
Over the weekend, this crazy bike ( electric ) went on sale...You sit on the handlebars.
-Posted by Matty Clark

.
.
.
Cyclocross Nationals has re-inspired the cyclist \ Rockstar ethos.
So it's time for a new poll.
Because hero's were born unto the world every day of the compeition in Bend, there is a spot to appoint your own Rockstar.
No comments:

.
.
.
After watching the vanilla pudding coverage of Cross Nationals on TV.... errr I mean the internet. There is a good chance that this tee shirt is going to get made and worn proudly round the office. 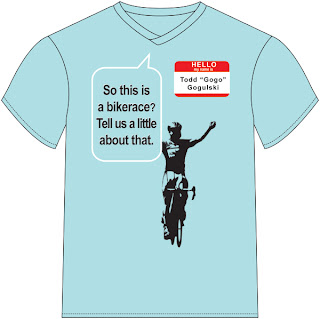 "So he can't cut the course right?!"
Hard to believe Gogo was actually the State Champ of CX for New Mexico back in the mid 80's.

.
.
.
Monday morning after nationals and the question is....
Where's this guys video: 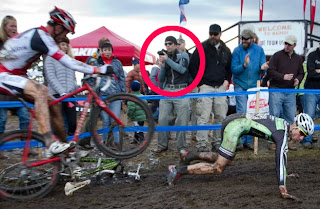 .
.
.
CX Nationals!
Its like the Super Bowl! But the pregame show lasts for 2 days beforehand and is waaaaaaaay better....
Here
No comments:

.
.
.
You know your small New England based bike builder is making it big time when the Indonesian knock-offs start appearing.... Here
No comments:

.
.
.
There will be major media outlets covering the controversy of the last couple of days soon enough, but till then, this makes sense...
No comments:

.
.
.
Something is afoot in New England Cross.... Here
No comments:

.
.
.
Continuing with the gift shopping theme of the day:
There's a bunch of custom head badge makers on Etsy.... This one takes the cake though....Here
2 comments:

.
.
.
And while we are on the topic of way-cool-rockstar-type products, we give you.... The Teva Stiletto.... Here
No comments: