Bike racing Rockstars are a narcissistic and sadistic bunch...
You down?
If so it will be easy for you to appreciate this collection of before & after photos of random city folk asked to jog hard and then pose again for the camera.
No comments:


A rockstar can not be bothered by using hand signal during a hard training ride in the city.....Here

-posted by Matty Clark
No comments:


The experts say that Cadel's win has a direct impact on sales of BMC bikes and that they are instantly more popular when he wins the Tour with one...

Not exactly what the experts had in mind: 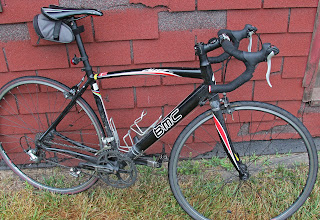 
A great name for a midweek cyclocross training series, here

Here is a great collection of photos, especially if you happen to be a fan of Garmin Cervelo
No comments:

We've always been partial to Scott Bikes, so when we were given a peek at the 2012 dealer book, it quickly became the highlight of the week. However, no bike company makes nothing but good decisions and a glance at the year to come left us wondering about some things. Here are some details that stood out:

No more Addict ( except for the CX bike!? )... Yep, it's too bad but Scott is going all in with the Foil for 2012 and beyond. When they say "your next bike" they mean it. The Addict set new standards for weight and stiffness when it was released in 2007, it will be missed. On the other hand, with one less model to support, Scott has to offer the Foil frame at a reasonable price point of $2499. That will be the Foil 40, equipped with Shimano 105. Got a nice parts package that doesnt need upgrading? THe Foil 40 will be your next bike. It is also scheduled to be available in October.

Got an itch for electronics? The Foil 15 ($4599) will be the first Scott to offer Ultegra electric shifting. It won't be available till December though.

The Spark MTB race bike gets a redesign, making sure that it will continue to dominate the cross country race scene. 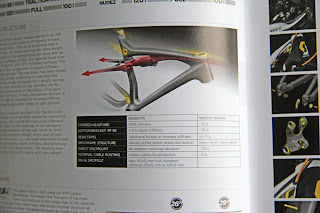 Need the hottest tri-bike? The Plasma 30 is pretty much the same frame as the Plasma Limited that Tony Martin used to TT on but at an awesome price point of $2699 for the complete bike.

On the other hand, Scott continues to tone down their CX bikes for a 2nd year in a row. There will only be one carbon model, the Addict CX. Only available with Ultegra parts, and you can forget about getting tubulars out of the box. Scott, despite having one of the best CX frames out there, obviously has suffered from lackluster sales in this department. Price: A reasonable $3099. The high end CX market is a tough cookie to crack, but with more and more racers hitting up events, the high end market will develop eventually. 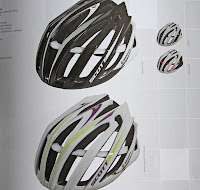 The Scott Vanish ( 210 grams size medium ) looks to be one of the nicer helmets available for next year. No word on price yet but if the helmet line follows the footsteps of the shoe line, it will be reasonably priced.

Speaking of shoes, one disappointment seen was an unchanged shoe line-up. Scott's 2011 shoes impressed greatly, and with lower price point then the competition, sold well all year long. I suppose you can file this under "if it isn't broke, don't fix it." 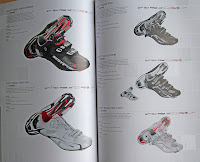 Check out this electric behemoth. 45 pounds of do-it-all-mobility. No word on price yet. 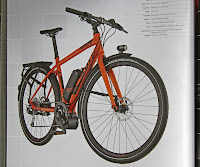 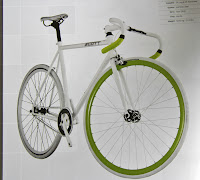 Is the single speed craze over? The brand managers at Scott hope it isn't.

Scott obviously is investing big on its bike brand, and as we've seen before with the case of Specialized, Trek, and Giant, that means introducing a line of somewhat generic tools. 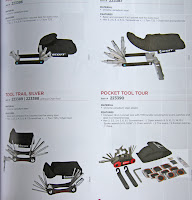 Can't forget MTB tires as well. Although a couple of these seem actually cutting edge. 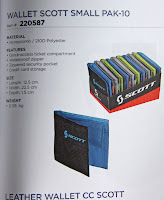 Wallets !? Some of the new items made it seem like Scott was simply looking to stamp its name on as many things as possible. ( give them points for listing the weight though )

Any bike company with more button down shirts then actual road frame models will be disappointed with anything less then complete world domination. 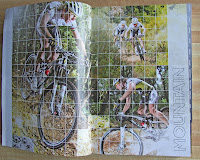 Bye bye Cavendish and Niki Gudex... This is the only photo of anything that even remotely looks like a pro cyclist that was used in the entire workbook. Perhaps the consumer catalog will be different.
4 comments:


Hilarious video of Stunt driver with his Mom in the car: