.
.
.
Don't forget that EuroCamp is coming up... It is always fun to follow a bunch of talented American cx racers thru a super packed 2 weeks of both small and large Belgium races..... Here
No comments:

.
.
.
Another mostly steel tubing bike brand specializing in hardtails and do-it-all-commuter (?!) cyclocross bikes is heading to the US.... These guys
No comments:

.
.
.
The UCI gets its money hungry hands on another opportunity.... Here
No comments:

Go For Everything from /DEPARTMENT on Vimeo.
No comments:

.
.
.
This Redbull Danny MacAskill video has been rockstaring out all over the world for a couple of days now.
Watch it now!.... Here
No comments:

.
.
.
An innovative way to deter bike thieves... Here
No comments:

.
.
.
This video is awesome and will probably get nominated for a Rockstar Award...

.
.
.
Poll Results!
After an extended voting period, Adam Myerson has prevailed against the polarizing character Sean Smith. Myerson was soundly ahead after the first few days, but then a massive influx of NYC voters required the poll be kept open. Despite the additional voters who were alerted to the poll by a NYC area website, hometown winner Sean couldn't close the gap, raising questions of the prevailing opinion of NYC's new wonder rider. Myerson proves that persistence, good sportsmanship ( most of the time ) and a willing to suffer thru years of second and thirds can indeed pay off. Adam will be getting his prize in the mail in 2-3 weeks.
No comments:

Posted by Matt Clark
No comments: 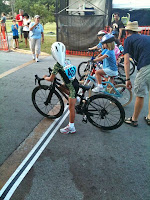 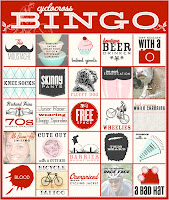 
He just might make it into the next poll. ( which raises the question: At what age can one become self aware of one's Rockstar-ness? )
No comments:

.
.
.
Going to college for bikes! This is awesome!
No comments:

.
.
.
Now that C.A.N.R.S is picking up some internet speed, it is amusing to see some of the search terms that bring people here. Case in point:
"awesome feeling when squeezing your legs"
1 comment:

In an effort to give some attention to an often overlooked workhorse of cycling, we present:
The Team Trucks ( and a couple of cars )
Oh sure, the team cars get plenty of attention in Europe, when they are usually ferrying the mega stars of road racing here and there. In the U.S. of A though there is less fan fare for these internal combustion warriors and they are taken for granted, even though anyone who owns a floor pump will generally agree they are pretty darn cool. So here are some of the nicer ones spied out during the week in Vegas.

Felt had about 4 of these on site.

Seen on the road... Rock Shox

.
.
.
Some great details regarding the economical impact of a large cross race to a community... Here
No comments:

.
.
.
Quote of the day:
"I haven't been 'training,' but I don't own a car so I ride almost everywhere and I manage to get some intensity in here and there,"
- Tom Zirbel... Suspended pro who just beat Lance's ( Armstrong ) record at a unsanctioned time trial in Texas.
No comments:

If there is one good thing about Interbike staying in Vegas it is the fact that now we can go back to Lotus of Siam for what is the most unique thai food we've ever had.

.
.
.
An interesting article on aero helmets... Here
No comments:

.
.
.
Well, another poll is in the bag. This time it was Shawn Milne just edging out crossresults.com creator Colin Reuter. Shawn, if you are out there, make known your publicist's address and we will be sure to get a tee shirt and some stickers out to you.
Another cross-heavy poll will be up before tomorrow.
No comments: