The Approval from on high

The world of racing bikes was surprised in mid December when the UCI announced that it would initiate an approval process that would, in time, require all frames used in competition to be pre-approved by a technical team.

A frame sticker.
In the next half of the article, I'll explain why it won't work, but why it also will...


PART 2
Last week, we discussed how the biggest bike brands in the world are really the ones pushing the introduction of the UCI’s approval process.  They have determined that they are losing customers and  perhaps more interesting, they are losing sponsorship of secondary teams to much smaller companies that make a buck by assembling bikes ( Not building bikes, there’s a difference ). Big brands also see more and more consumers realizing the indistinguishable-ness of most Asian made frames, regardless of the stickers ( or lack of ) on them. How much money are they loosing because of these 2 developments? In the big picture, not much at all. But as the Big Brands are asked to spend more on sponsoring the best teams and as they are running out of gimmicky catch words to assign to their newest models, they have seen this approval process by the UCI as new type of patent. They get bonus points for the fact that it ( the sticker ) will end up being something visual, identifiable and marketable when the bike is on the showroom floor.
It actually is a brilliant move of solidarity on the industry's part. And you can’t really blame them for it.
The barriers to starting a bike brand have never been lower. These super small companies, who simply import whatever frames are available to them, can operate on thinner margins because they have no marketing, research, development, or testing costs. And it's not just bored guys with money to burn starting these brands. Even the teams themselves can be included. For example, Team Champ Sys riding Champ Sys branded bikes. These entities can absorb the raw cost of providing cheap frames to lower tier teams and dollar for dollar, their investment in pro cycling is making a bigger impact on their overall business then a huge multi-million dollar company gets from ProTeam exposure.
The approval process provides validation for the countless millions spent on the normal, day to day costs of operating a real business that designs, tests, advertises, warehouses, and warranties bicycles.

The not-so-secret goal therefore is twofold:

#1  That silly sticker, that technically means nothing to the millions of bike riders who will never own a UCI License, and therefore never need a UCI approved frame, will perhaps cause them to see value in the approval and the sticker when it comes time to buy a bike. My prediction: Many, but not all, will. And further down the road, the sticker will end up being a symbolic after-thought in this game. I would be willing to bet that there will be some frames that Big Manufacturers get immediately approved that will not even get the sticker put on them.

#2  This is the one that stings people like you and me. Some of those small bike assemblers will get out of the sponsorship game, whether it be on an individual or team basis. And for the smallest guys who are unwilling to play with the big brands, and get their models approved, their eventual fate will be to close up shop. Even some legitimate, mid sized bike builders ( Jamis, Ridley, Norco, etc ) will be forced to rethink what frames they officially make available to racers. The end result, less choice for people like you and I. And higher costs for getting bikes built with the racer in mind.

So score 2 for the big brands. They will indeed succeed in driving away certain “brands” and logos from the racing crowd, which will, due to a weird reverse trickle-down effect, keep a small but meaningful number of non racers from buying them as well.
Again, you can't really blame Big Business for trying this. Big Brands need to watch out for themselves,  and cycling in general needs the big brands. Fans need them, bike riders of all sorts need them. But to involve the world-wide sanctioning body of bike racing in this is wrong. Here's why:

For the small cross section of riders who will end up shopping for their approved frame out of necessity, of which I am included, the UCI is creating an environment were breaking the law out of necessity makes it a conscience-able decision. This of course devalues not just that particular law but the whole agency tasked with enforcing it. Similar to laws currently on the books making it illegal to use a cell phone while driving. Much to the dismay of those who follow the rules to the letter, studies have shown that those laws are doing zilcho toward preventing distracted driver accidents. Instead they have turned most decent people into law-breakers who become numb to the rules. Something similar might just happen with bike racers.


Breaking the law , breaking the law
As soon as the announcement about the “sticker” was made, UCI haters all over asked, “isn't a sticker copyable?”. The answer is of course, yes it is. The UCI knows this and doesn’t care. In fact, in a surprising F.U. type of move, the UCI isn't even providing the actual decals to builders who get approved. Builders get a simple email with the artwork attached. It is up to the frame manufacturer to produce the labels in the approved 3 cm by 3 cm size. Well surprise surprise, it didnt take long for some law abiding bike rider to find a work around to this.  Forging decals a little too risque for you? No problem, all one must do the next time you're questioned by a UCI official is state that the bike was purchased before 2011. Voila! That is a get-out-of-jail-card that surely will work for a few years to come.
I don't mean to sound so anti-establishment with this. But in reality, this rule needs to be seen as something that benefits the Big Brands primarily. From the racers perspective, it is a solution to a problem that didn’t exist. As the wise frame builder Jonathon Greene stated, “ the greater issue by far is the ( body's ) position ( on the bike ) and no decal will approve that.”. I believe that ultimately, history will show the rule to a be a failure on the part of the UCI to pursue it's directive.
The UCI should be looking out for the real interests of the racer and of the sport. If this is disappointing to you, the best recourse is of course, voiced by one's wallet. Do not buy frames made by the Big Brands. Support the handmade builder who is connected to the racing community mostly thru the growing cyclocross movement. Support companies like Cutter to continue importing affordable parts and frames. Encourage Taiwanese business men who go thru the trouble of making factory frames available directly to the rider.

Feel free to leave your comments below. 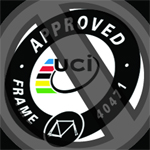 Should I change my name to CORP bike co's suck? For pushing this they do.

It's true, the UCI has made some decisions that truly leave one scratching the head.

This article is proof of the shortcomings of blogs in general.

Just like a guy at the pub, flapping his yapper.

Irresponsible, misinformed and poorly thought out.

Would love to hear why you think the rule is a good idea.

This is such an interesting blog. You are very knowledgeable about this subject. Please check out my site.
TLR Carbon wheels