.
.
.
Sony is getting serious about video gaming.... Evidence here.
No comments:

.
.
.
I need to post about this site before the market comes back and the pictures are irrelevant.
I often wondered, if I was a stock broker, whether I would react to bad news in the stereotypical way....
Brokers with their hands on their faces here.
No comments:

.
.
.
If you havent seen anything about this book; "Roadie". Check it out when you can... Its a fun read...
Excerpts can be found here.
(submitted by Endurance Princess )
No comments:

.
.
.
A good few paragraphs on getting ready to race here.*

* disclaimer - a true rockstar stumbles out of the car with 15-20 minutes to spare, pins his number on in the Port o John, rushes to the line, and finishes up his coffee seconds before the whistle...
No comments:

.
.
.
Back to the theme of flying.... And an alarming story of security flaws at our airports here.
No comments:

.
.
.
While Italian rock and roll has a long way to go to be worthy of this blog, their highway patrol department gets a 4starguitar Rockstar rating.....here
No comments:

.
.
.
Lack of posts on this wonderful monday is due to extra time in the recording studio, er... I mean office...
No comments:

.
.
.
Because Rockstars rely on air travel like Madonna relies on Botox, some recent winners in flyer voted Airline contests here...
Southwest pretty much cleaning house and kicking tail...
No comments:

.
.
.
Start the work week off with a laugh....
One of the funniest SNL skits ever right here.
No comments:

.
.
.
Crystal ball Sundays:
The comeback kids will rule the headlines in 09...
Congrats to Basso... Redemption tastes as good as Pumpkin Ice Cream in October.
No comments:

.
.
.
The wizards at Champ Sys can come up with some pretty interesting designs for cycling jerseys....
As evidenced by David Sommerville's ( Champ Sys spokesman ) bachelor ride wear here.
No comments:

.
.
.
Creepy Crispin is back. I had the opportunity to run into and chat a bit with Mr. Glover at Sundance Film Festival a few years back. He is a very nice fellow. Can wait see his turn here.
No comments:

.
.
.
Although $121 pays for a lot of tolls, if you are the dangerous type that likes cruising thru the EZpass lane without a little magic white box against the windshield, you need this.
No comments:

.
.
.
Need a camera mounted to your handlebar?
Check out this.
No comments:

.
.
.
A very interesting article about some research done to establish what is better for climbing... Staying seated, or standing.....Here
I for one thought that staying seated was almost always the best way to go. Im gonna have to go have a rethink now.
No comments:

.
.
.
Interbike East was not without its problems.....
No comments:

.
.
.
An brief, but interesting list of some roles that actors turned down here.
No comments: 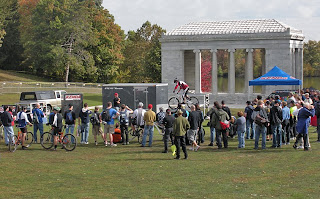 The Trials Stunt Show was fun. Though no one knew how to make noise for it. 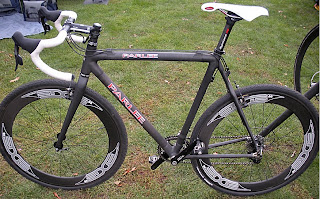 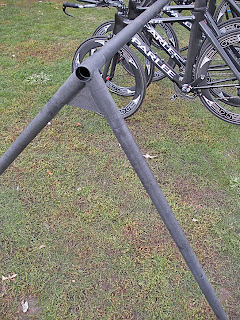 Parlee 's racks were made of carbon.... 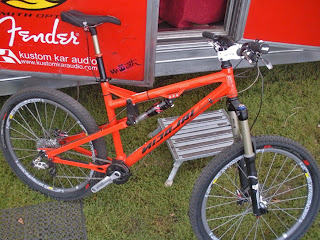 Tested ( and abused). Nicolai with SRAM Hammerschmidt. Heavy bike that likes to be thrown off things. Hammerschmidt feels like it was built by NASA. 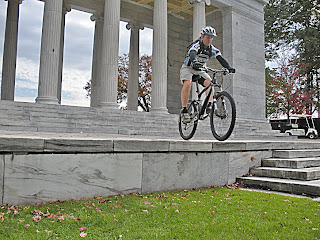 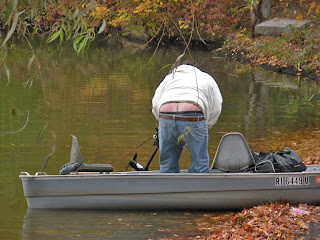 Just some Rhode Island wildlife seen while riding out on the road bike loop. 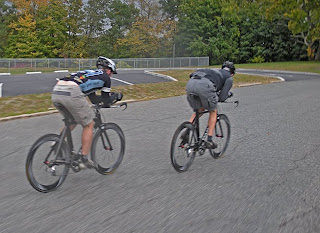 
A while ago we decreed:

"Here are 3 things that can ensure that the east coast event is as successful as the west coast daddy:"

Swag - In Reality what we found in Providence: Very little..... nea, none. Grade : F

Beer - Bud or Bud light at the end of the day by Pedro's : B minus ( clam chowder was good )

Stars - None. Well, Zellman the bigwig from SRAM was seen working the booth. The Keough brothers were selling raffle tix for a TV to raise money for another Championship winning trek. And Adam Sullivan was seen in his civies wandering aimlessly. Richard Fries was surrounded by Paparazzi & completely inaccessible all day long..... Grade - D plus

OVERALL - B minus. The single track was fun, albeit very brief. Bikes were always available to ride. And parking was a breeze. Plus no desert conditions ( choking hot dust, radioactive sunlight, razor sharp rocks ) to deal with. Lack of downhills was frustrating.
No comments:

.
.
.
While we wait for the negatives to dry, check out some
"tongue-in-cheek" writing about cyclocross from the bike snob here. ( skip to the end for the good stuff )
No comments: 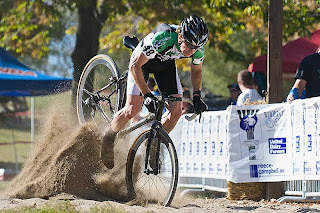 .
.
.
Creepy Monday continues, the Gnome is back in Argentina.... here.
No comments:

.
.
.
It's a strange and wacky Monday around here.
No comments:

.
.
.
A good article about the recent success of a good guy here.
Tuft surprised many people with a second place in the WORLD ( not North American mind you, not the Canadian, the world ) Time Trialing Championships. Those of you that didn't notice the silver medal should right now. People respect him. He is known to be "clean" and will have a much deserved spot on the Chipotle team next year.

This guy has Rockstar written all over his mug. Read the story, throw away your razor, fill an extra water bottle with lead ball bearings, kill your next supper, go out and get stronger.
No comments:

.
.
.
When worlds collide, I easily get confused and emotionally withdrawn...
I never ever ever thought id be thinking about cycling in the same way as I have been known to wrap my brain around NHL hockey by EA Sports or the game of football by John Madden....

But now the chance to be on the bike, while off the bike recovering... Is here.
1 comment: 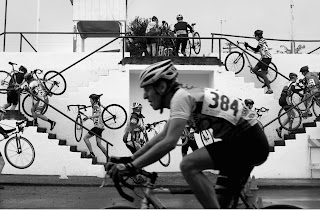 .
.
.
If you were a fan of TV's "Strangers with Candy" series, with Amy Sedaris, you will like reading this.
No comments:

.
.
.
Movie news here. Jean Claude Van Damme is back!
A true rockstar knows that its ok to poke fun at him(or her)self.
Looks like it will be a funny movie.
No comments:

.
.
.
Take a look at these amazing shots of some house in Houston. The person was evicted.
No comments:

.
.
.
Here is an interesting product that we at the shop would love to try.
Tho i get the feeling that it may just be double sided carpet tape of some variety. In which case you never need to spend more than $9 for a roll
No comments:

.
.
.
Richard Fries, long time beloved CX\Road commentator and Media man had a little run in with pesky doctors over the weekend. If you want his email address to send him a get well, request it by leaving a comment.
No comments:

.
.
.
Here is some Ironman news for you. And duh, we are NOT talking about the Triathlete event. Tri-Guys are too much in shape to be a true Rockstar
No comments:

.
.
.
After successfully enjoying a "rockstar mustache" for the weekend. I give you these
(Although a 'stache doesn't make you go any faster on the bike, the lady folk love it... As a Rockstar, you gotta pick your battles sometimes....)

.
.
.
The world of cycling is calm & boring before the Gloucester Cross Storm... So nothing to report...
But this company gets a 4star-Guitar Rockstar thumbs up.
1 comment:

.
.
.
Start your day with a couple of photos
of what is surely the coolest, most impressive library
and collection of stuff. I was speechless when I saw it.
Here
No comments:

.
.
.
Good video of Lance doing Cross in Vegas here.
Complete with a Superman-like introduction...
No comments:

.
.
.
Great deal Thursdays
HERE. Buy it now. You are foolish not to
No comments:

.
.
.
Start your day off with a little Controversy
No comments:

.
.
.
A great slideshow by Cervelo HERE.
Aero vs. Lightweight... Which is better? This should be required reading for weight-weenies and Aero-mongers alike.
No comments: You're kidding me
No comments:

.
.
.
The stickers that make up the logo on the top of this page are available. We are trying to sort out some kind of online shopping experience. Until then, email us at info@cheshirecycle.com and for a pittance we will send some out to you....
No comments:

File under "nearly a good idea"...
a metal plate with a message to put into your carry on luggage... The x-ray screener reads it and has a chuckle... Haha.. You're so witty....

Seriously though, as I was returning from Vegas i put my Egg Beater pedals into my carry-on. First stop; McCarren International... the screener simply paused and looked my way toward as i waited for the bag and asked. "You got bike pedals in here?". Dude knew his stuff. I said yes and the bag emerged... We actually had to go thru security in Newark again to get on the connecting flight... 2nd time thru, the screener stopped, tilted his head, called someone else over... Discussed it among themselves, called a 3rd person over... Bag got pulled for inspection. I said nothing... Didn’t take too long to find them and the kind lady looked at them with those latex gloves on, seriously confused as to what they were... Lots of "ohhhhh, I get it now" when i ended up saying what they were... As i walked away, She advised me "pack those away next time, they got a lot of suspicion...."
1 comment:

.
.
.
Something worth trying
No comments:

Grizzly Bears will not attack groups of four people or more.....

And you need 2 ushers for every 50 guests at a wedding....
No comments:

.
.
.
A pretty interesting comparison of a bunch of Carbon Tubulars here. It's on the older side (2005) but it still makes for good reading...
No comments: