The outdoor demo started out with a bunch of Mountain bikes...

Master Chief Dillon P getting his bank on 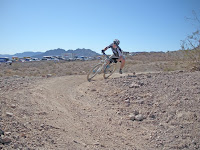 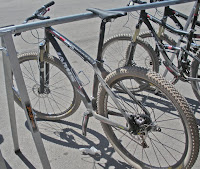 Ridden: The Full Carbon Jamis 29er. Nice but not our cup o tea. Frame was light but nimbleness was erased by the big 29 inch wheels. Rolled over VW Bugs no problem but for rocks and roots where you gotta actually steer pretty quickly, not the best. Or at least not as good as a quick steering 26 inch mTb. 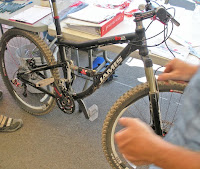 Ridden: The Jamis 650b2. In between a traditional 26 inch MTB wheel and a 29 inch wheel. Rolls well over stuff but still a little big and goofy for our East Coast taste. Better than a full 29er though. 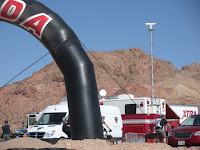 We had a chance to get the inside scoop on the New XX MTB group from SRAM. Pretty much designed for racers, this grouppo is almost as light as Road bike groups. Here you can see the nice curved metal work to get the chain from big to small in the front as smoothly as possible. The group is strong\reliable as it is light. 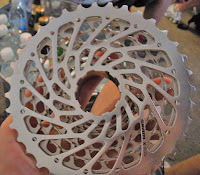 Here is the XX rear cassette. 9 hours to carve this out of a single piece of steel. Ungodly light (think SRAM Red cassette light) and super strong. Boukoo bucks here. The largest cog on the back is aluminum and pressed on.

The desert dust is a powerful force to deal with. Here it can be seen trying to strangle some spokes that had some oil\lube\locking compound not completely cleaned off the rim 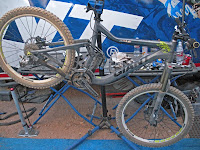 Ridden: The Giant Reign. We took this out on the DH loop. It could have been a little more forgiving\slacked out for a roadie who never goes DH'ing, but with some getting used to this bike is a winner. Climbs like a much lighter bike.

Here we spied a Luna Chix team mechanic peeling decals off $2000 Mavic's to get ready for the next night's CX race. Gotta keep the sponsors happy! Ridden: The Salsa El Caboeng. One of the few Salsa MTB bikes thats not a 29 er. Great ride, awesome bike for aluminum. Climbs nicely. However, it deosnt beat this year's best of show ( for the second year in a row! ) The Scott Genius 20: 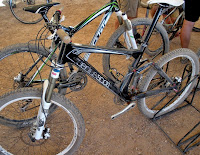 This full carbon bike is light, the suspension set-up and components ( rear shock by Scott ) are complete winners. This bike can drop a 5 footer and then out climb a hard tail on a tricky ascent. 2010 year's bike gets a lockout control that gives you 3 settings of goodness.... FRONT AND REAR shocks at the same time. The only complaint is getting used to constanlty wanting to dial in the suspension setting. Its like having a 3rd shift lever up there.

Onto Road bikes where we had a chance to ride the Giant TCR Advanced SL. Predictably Very stiff.... A+
Ride quality was decent....B
Lightness was ok due to just having Ultegra level parts.... B- 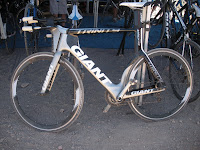 Also ridden was the fancy Tinity TT bike. It felt fast and not that harsh.
Buy a size smaller than you normally would

Ridden: The all new Scott CR1. Here is a shot of the front fork with its backwards set stance. Built to be a fast, comfortable, all day steed, it was indeed comfy with its more upright positioning and flexy soft feel. Dont make the mistake that it was too soft. You def can feel the Carbon stiffness. But there was almost none of that carbon fiber bike road buzz feel that we have come to accept with bikes these days. 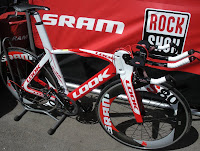 a random shot of the Look TT bike... No riding this one allowed.

Ridden: The Specialized Transition TT bike. We chose to ride this to demo the ovalized chain rings by Rotor. The bike itself felt great. A little nicer than the trinity even. The Rotor rings will be a subject for another post but short story: everyone should at least try them.

Not ridden but ogled: The New Jamis Xenith TT bike. We are eager to try out those new American Classic 420's 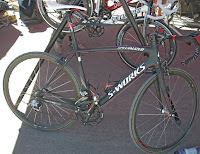 Ridden: A Specialized Tarmac SL, also equipped with Rotor Rings. This bike was by far the lightest of the 2 days, thanks to the Zipp 202's it had. Great feeling carbon. Snappy like a whip.

Ridden. An Orbea Orca equipped with Shimano's new electronic DI2 grouppo. The bike itself was nice. Snap - A+ \ It was predictably harsh to an acceptable degree if you are a racer. Felt great at speed and climbed like a champ. The DI2 worked awesome. A bit slower than we expected but still well within racing quality. Hitting buttons instead of pushing levers took a bit of getting used to as it felt like you were riding a toy. For now, we will stick to cable actuated shift systems. 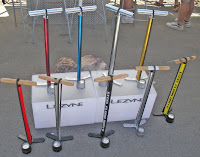 ANd the last shot from outdoor demo, a nice display of pretty pumps from Lezyne. 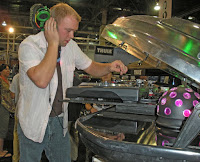 On to the serious indoor days.... Well not super serious, especially after 5 PM where companies pulled out some stops to have fun. Here Master Chief Dillon P gets his DJ on at the Thule booth. Thule had rigged up a full 2 decks and IPOD to fit into a roof rack. Plenty of fun, zero practicality. Give them credit for having a decent selection of vinyl to pick from. Headphones and prizes provided by the evils at Skull Candy.

Everyone needs to get into the fixie craze. Puma had a big space reserved for little more than showing off some brightly colored bikes.

Speaking of Fixies, here is a sharp looking brushed Aluminum bar from FSA

Stevens bikes from Germany continues to offer more models in the states. Here is a sharp looking Road model.

And a TT bike.

These shoes from Carnac have a magnetic latch system that keeps the buckle from coming undone. (the two black dots on the side) Pure Gimmick here folks. Other than that the shoes looked very nice. 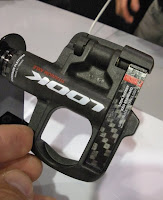 Here is Look's new pedal with a carbon, not metal, holding spring. The carbon leaf is replacable. ( good thing cause if you hit a pedal in a fast corner, guess what gets shredded first ). The pedal is of course light and expensive, but the nod to new pedals has to go to Time who debuts a similair no-medal-pedal but whose carbon spring is mounted safely within the pedal and feels like melted butter getting in and a offers a more solid Ka-chunk coming out. Plus Time's newly designed cleat is lighter for an overall lighter package than these. 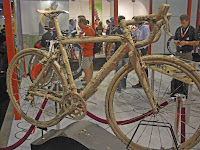 A funny shot of a Kuota CX bike. This one in all it's mudded up glory got plenty of looks as passersby grew tired of seeing highly polished bikes.

Give the best of bike show lighting award to Argon. 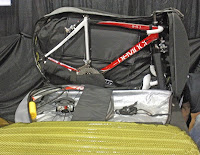 This is a new bike luggage\flight carrying bag from Bykend. Designed to be super light for lighter race type bikes. It has fully inflatable ( and patchable ) sides. They bragged that a sponsored rider of their's who travels often has not been charged once for bringing the bike, due to the fact that the bag is techinally only one inch oversized and that the entire package is so light no one thinks its a bike. 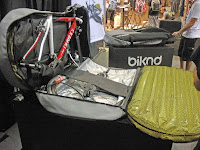 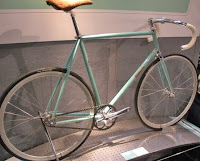 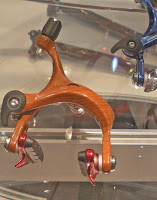 We end with a highlight from the nerds at Vector from southern Cali.
Always suckers for new power measurement systems, they had our ear.

This system is designed to be cheaper ( retail $1000 ), lighter, and fully portable between bikes. They take a pedal ( for now only Speedplay's ) and mount a small electronics package inside the spindle hole already there from the pedal factory. A small battery and wireless transmiter

gets bolted and zip tied to the crank arm and viola! You are done. It measures pedal spindle deflection on a microscopic scale and it is said to be accurate to + \ - 1.5%, weighs only 50 grams and easy to set up and use. Keep your eyes out for this one if it actually hits the retail $ target. Slated for early 2010 release.

Vegas isnt without its dangers.....

.
.
.
Cyclistsarenotrockstars contributer Shelby Clark ( aka the Shelbytron7000 ) is riding in a charity bike ride and she needs your donations: Here

.
.
.
Even the unsuspecting can be a rockstar once in a while.... Here

The 2nd guys gets a little freaked out me thinks
1 comment:

.
.
.
Totally not bike related....We were impressed with this
No comments:

.
.
.
Good news if you are moving to the Charlotte area.... here
No comments: .
.
.
cycling oddities from the Veulta
taken by Greg Wolf

posted by pb
No comments: