Here's a great way to start the short work week:


More design a bike contests to enter and vote on....
This time from road machine maker Niel Pryde... Here
No comments:


Alright back to reality.... Feeling bad for the US Postal Service and their involvment with Lance-y Pants?
The USPS paid $31.9 million to fund the team from 2001-2004. Did the government get defrauded by paying for the sponsorship as the cyclists used performance enhancing drugs???
The United States Postal Service hired two firms that showed that the sponsor received $103.6 million in domestic exposure from the sponsorship.


Tired of the depressing cycling news that's made its way into the mainstream media?
Let's have some frivolous fun..... And also introduce a new feature that will be a regular distraction here at C.A.N.R.S.

Advertising for Rockstars!
A look at the adverts aimed straight at the cycling demographic.


First up, the Worst of the Season award:

This goes to an entire concept, an entire series of ads from Pearl Izumi. No doubt you have seen them, here they are: 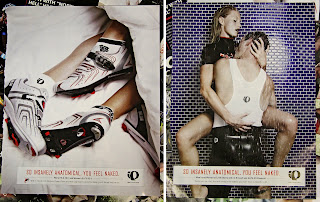 and worse then worse: 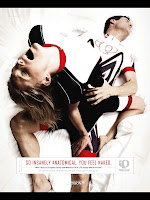 This is not the first time Pearl Izumi ventured into such waters... This ad: 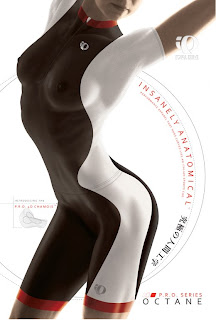 was run a year ago in publications outside the USA. Same basic concept but much simpler and 300% more effective. The lesson for advertisers is clear; suggested acts of intercourse are very hard to pull off in cycling publications.
Actually, that statement can be clarified;

In a magazine with over 90% male readership, showing dudes during the fuzzy tingle times is just plain gag-inducing.

To prove the point, this ad, from the same series, hits the target much better (thanks to humor): 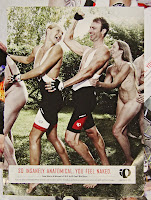 Moving from last place up, we have an ad run by the Performance bike retail chain: 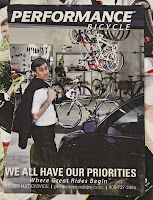 This ad, obviously conceived AND photographed in-house misses the mark so badly it almost succeeds based on irony and sarcasm. Lets dissect this advertisement a little more closely: 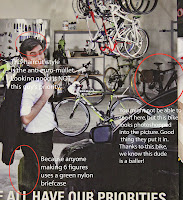 It's no secret that Performance is the McDonalds of the specialty bike shop world, and if all they choose to display in ads is Fuji's and out of focus Focus's, it's gonna stay that way.

Moving on to something a little more respectable: 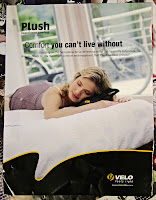 This ad was probably produced for pennies. In this case, you get what you pay for. It's a good example of bike people coming up with a killer concept but then ushering it down half-assed street all the way to completion.

And this brings us to the Best of Show award for the season: 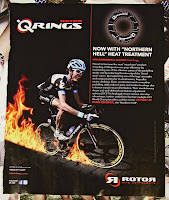 This ad, probably done all in house at Rotor HQ by a photoshop wiz, is simple, fun to look at, understandable and an effective use of an athlete. Johan is no Thor in the world of cycling star-dom so there's no need to make him into some type of gladiator or chef. But.... the dude did win Paris Roubaix so he has some clout now. A very strong endorsement of Rotor Rings and an advertisement well done.


Congrats to Chris Horner!!! So Rockstar! 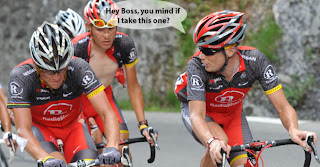 
Amidst the never ending furor over Lance Armstrong and his alleged doping, repeat the C.A.R.N.S. mantra:
1. All the top guys had "help"
2. Lance still worked harder and trained the best to beat the rest. Good for him.
3. The past is the past, reliving it with confessed cheaters who hung to lies for so long only benefits the egos of the fallen.


More UCI douchebaggery...
Apparently they have now banned bike mounted cameras. The GoPro's were getting plenty of use at the Amgen Tour of Cali.
( sad face )


The Scott Foil is not for sale yet, but the guys over in Colorado at The Gear Movement have gotten their sticky fingers on one of the most anticipated bikes in a long time and have put it on.... Where else but.... EBAY.... Here

posted by Dillon P
No comments:


The trend of compression garments designed and marketed as recovery aids doesn't show any sight of letting up. Ever since I took a looking at one of the first to the market, the Skins Recovery Tight, many more companies have introduced compression wear. One company's offering that I have been eager to try is Louis Garneau. Anyone familiar with L.G. products knows that they usually fly under the radar a bit. That is not due to the quality though as generally speaking, what they produce and sell is well thought out and made to high standards.

The Power legs are made from panels of varying compression levels. They cost $65 and that is considerably less then most top tier brand's offerings in the category. L.G. also recommends these as base layers when extra warmth is needed. I wouldn't purchase these to use as base layers. They are a little too tight for my preference. While the tightness may be helpful for muscle groups while working out, I found it to be uncomfortable and distracting. Perhaps with acclimatization, one would get used to it, but the feeling of extra compression on my lower half throws off "body balance". Perhaps if I had worn compression wear on the top half it would have been less distracting. This will be an area of personal preference and my opinion should be taken as such.

Used as recovery wear though, the tights proved themselves to be worth it and then some. One of the big drawbacks to the Skins tights in my opinion was the way they overheated my legs and made for an overall uncomfortably hot feeling after 20 minutes or so. If the surrounding temps were cool or if I was stationary, that discomfort is minimized. But over the past months, I have found myself choosing to not wear the Skins for that reason. The L.G. tights felt much "cooler" and they don't always results in that hot feeling. By not covering up the groin and waist area, the L.G.'s overall felt more comfortable when worn for more then an hour. One could argue that by making them leggings in style the possibility for shifting and creeping is increased. I didn't find this to be an issue. I did however find that the medium size was a little short for me. My inseam is just about 34 inches but my waist size put me at a medium. If I had to choose again I would go with the large and hope that there was still adequate amounts of compression with the bigger size.

As far as whether these helped with recovery, that is such a subjective thing to quantify that I won't make any claims. There have been some recent studies published that cast doubt on whether or not any type of compression clothing helps with recovery. My legs always felt fresher when these came off after using them for an hour or so. However, it was hard to tell a difference in leg strength the next time on the bike if the subsequent workout was soon after. Overall, they are worth the $65 for sure. For air travel ( or long times spent driving ) these, or any type of compression leg wear, are a must. And if worn during competition, they no doubt would provide additional benefit over standard tights, so long as you can deal with the snugness.
3 comments:


Everything about these two pictures is 116% Rockstar 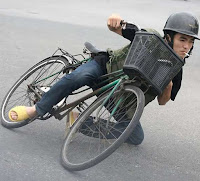 
The first rule of being a "Rockstar" is to get sponsorship.... So this is good news.
No comments: 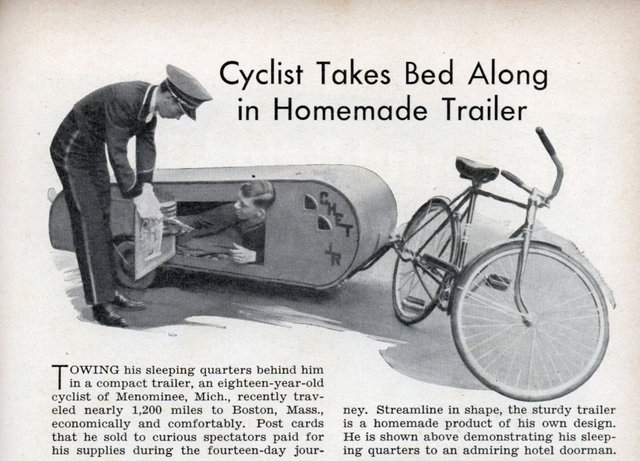 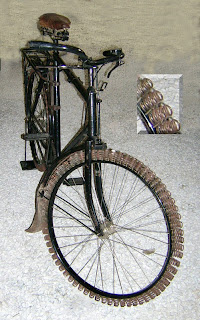 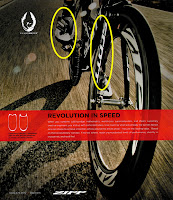 Zipps of course are always hot


File this under "rockstar-wannabe-but-always-kind-of-looks-ridiculous"....
The bike parts as a chair redoux: 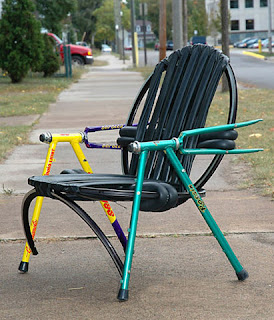 
If you happen to find yourself in Madrid, def swing by this bike boutique. It oozes Rockstar, class and gorgeousness all at once. 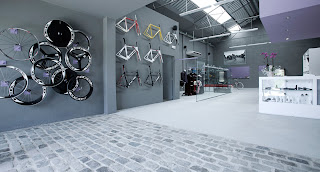 
They do this every year in Copenhagen 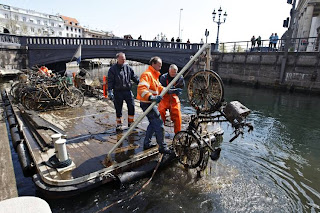 
Wearing cuff links is a step to Rockstar-dom of any genre... Wear these and you're pretty much there.

posted by Matt Clark
No comments:


This shoe from Bont:

Has been banned by the UCI for its wind fairing front. Good to see the company taking a tongue-in-cheek reaction to it here: 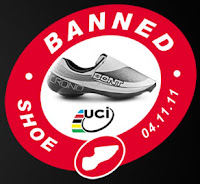 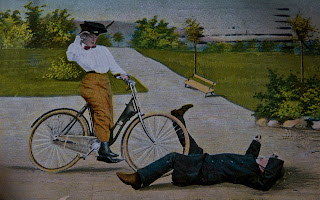 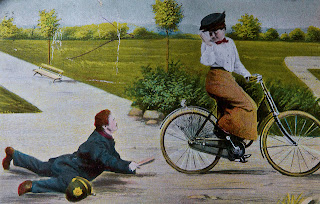 
This half MTB, half cyclocross race has Rockstar written all over it.... Here
No comments:


What do rockstars do pass the time in the off season???
here

Posted by Ferraris
No comments:


There are some very cool bike posters on this webpage.... Check em out.